For many years, Beijing Fenglong’s polymer R&D team has been committed to the development and improvement of greenhouse covering film. After Toyotani™ high clear film and diffusion film have been recognized by the market, Toyotani™ black and white panda film have also been on the market!

Adhering to the concept of excellence, this time Beijing Fenglong has only launched a 0.13mm (thickness 0.325mil) black and white panda film with a width of 0-12 meters (half a meter can be cut).

The black and white film is divided into black and white sides. When used in summer and autumn, the white side faces outwards to reflect sunlight and reduce heat absorption. The black side faces inwards, effectively shading, blocking light from entering, which can effectively reduce the temperature in the shed by 5-10 degrees; When used in winter, it reduces infrared transmission in the shed and plays a role in heat preservation.

There are so many applications of black and white film, one is due to its efficient shading and winter and summer cooling effect, and the second is because it has stronger mechanical properties, tear resistance, tensile resistance, can withstand strong winds, without rain.

However, the user will still encounter the situation that the black and white film is deformed and discolored due to the poor tensile strength, which further affects the shading effect. The reason is directly related to the quality of raw materials and the proportion of addition.

Beijing Fenglong has always adhered to the principle of doing the best. 100% imported pure new materials, raw materials are purchased from Exxon, etc., and a high proportion of metallocene is added, resulting in Toyotani™ black and white film excellent mechanical properties, good tensile strength and not easy to deform.

Beijing Fenglong has been in a joint venture with a Japanese company for 20 years. The quality control and management technology are all from Japan, and the quality is monitored throughout the process. This also gives us confidence and strength to promise Toyotani™ black and white panda film 0.13mm warranty for 4 years. Actual using life span can reach more than 5 years.

Though expensive, no single material waste being reused;

Though arduous, no single minute loosening for quality control. 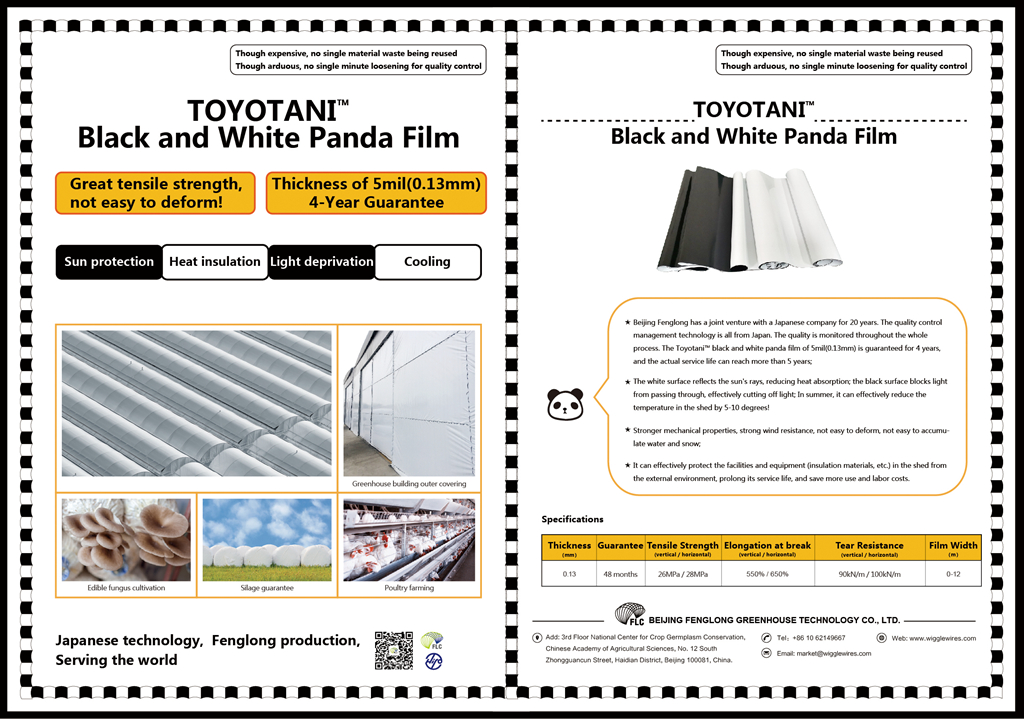